Our morning walk in Kaputian Beach Resort and swimming in Capt. Hook’s Red Parrot Inn’s clear water were the initial activities done for the day. Fortunately, Barney’s family was so generous for bringing us all to the Giant Clam Sanctuary, a fishing village across Barangay Adecor. We were told that it was one of the exciting spots in the Island Garden City of Samal to explore. Getting aboard in our hired boat hit the adrenalin rush.

END_OF_DOCUMENT_TOKEN_TO_BE_REPLACED

Our two-day stay in Captain Hook Red Parrot Inn in Kaputian Beach was indeed one of our best beach getaways ever. My family especially our kids still wanted to stay but we have to move on for another refreshing treat. Yes, another nature tripping to Hagimit Falls which is located in Poblacion Peñaplata, still in the Island Garden City of Samal. We were so thankful to Barney and his family for making our Davao vacation so fulfilling. END_OF_DOCUMENT_TOKEN_TO_BE_REPLACED

This is the last part of our Samal Island Adventure

If it wasn’t for this tour, we would not be able to discover Monfort Bat Cave that houses an estimated 1.8 million bats. It was recognized by the Guinness World of Records in February 2010 as the world’s largest colony of Old World fruit bats known as Geoffroy’s Rousette Fruit Bats.  Amazing!

one of the cave openings

It is situated in a 23-hectare protected area at Barangay Tambo, Babak District, a few minutes away from Hagimit Falls

Our visit to the cave was something peculiar because we just got off from swimming activities for the past several hours. We paid for the entrance fee (P100/head) and had a leisure walk on the neat pathway going to the Exhibit Area. The view of Davao Gulf and the tall palm trees were indeed a sight to behold. We were briefed about the bats and later accompanied by a 12-year old little girl named Amanda as our guide.

She started her cue as soon as we hit the pathway to the first of five cave openings surrounded by bamboo railings. We were amazed to see an immense number of bats hanging upside down on the cave wall. They were very close together, some were flying, some were clinging almost to the ground. It was almost 5:00 pm and their shrieking sound got so louder and louder.

the peeping father and son

The strong smell of their wastes known as “guano” exuded the area. It is said to be used by local farmers as a natural fertilizer.  We were lucky that we saw the White Lady bat, the only white among the millions of hanging bats. We were told that bats were forming a huge whirlwind formation at night time and will fly in groups across the region to pollinate fruits. And they will return before dawn.

That would be so exciting to see but the sanctuary is closed at 6:00 pm so we have no opportunity to witness that spectacular phenomenon.

When we went back to the Exhibit Hall we got to know more about the bats by reading all the articles especially those of National Geographic Magazine attached on the wall. We were given a small pamphlet with informative facts about bats.  And here it goes.

1) Bats are found throughout the world except in the Arctic and Antarctic.
2) Some bats live up to 30 years!
3) Of over 1116 kinds of bats globally, 123 come from Southeast Asia.
4) Of over 450 mammal species in S. Asia, more than 25% are bats!
5) The smallest bat in the world can fit into a matchbox – a bumblebee bat.
6) Bats are not pests they control pests by eating insects.
7) Bats increase our road supply by pollinating plants and scattering seeds.
8) Bats are not a bad omen.  They are considered lucky in some countries.
9) The world’s biggest bat has a wingspan of 6 feet and weighs 1 kilo (Giant Flying Fox)
10) Mother Bats have babies called “pups” once a year.
11) Bat homes are called “roosts” and they live in giant joint families.
12) Bats are comfortable hanging upside down.
13) Insect bats use ultrasound to find food and avoid obstacles.
14) Insect bats have less vision due to life in caves but fruit bats can see.
15) Bats are like cats in washing daily and being clean.
16) Also like cats, males bats mark their territory.
17) Bats are the only mammals that fly. Flying squirrels glide.
18) Bats have been in this world for over 50 million years.

Now you know more about bats.

We were the last visitors to come out from the sanctuary. We were so delighted to Amanda for being so informative. Such a small bright girl. We gave her a tip as a reward for answering all our queries.

We were thankful to the current owner, Norma Comfort for her advocacy of preserving these fruit bats on this island. With the help of the residents and the local government, they were able to protect the colony which has a valuable contribution to the ecological balance and to mankind as well.

Take a ferry boat from Sasa Wharf to Bakak Wharf. You may choose to ride a habal-habal (negotiate for the fare) or the Inland Express non-aircon bus and tell the driver to drop you at the entry point of Monfort Bat Cave.

The road is accessible by car so it is better if you bring your own and take the ferry service at Sasa Wharf for a minimal fee of P300 for the vehicle and P10/head for the passenger.

My excitement in our snorkeling today in Giant Clam Sanctuary at 9 a.m. woke me up so early.  I rushed into the window and hailed the curtain. Oh my, it was gloomy!  But rain or shine, we got out from Captain Hook’s Red Parrot Inn and started the day taking a morning walk in a nearby Kaputian Beach Resort to see the humble community of Kaputian.

END_OF_DOCUMENT_TOKEN_TO_BE_REPLACED

Setting foot at Samal Island or the Island Garden City of Samal in the province of Davao del Norte is the most exciting part of our Davao City tour. The island which has been said the largest resort city in the Philippines boasts of the famous Pearl Farm Beach Resort, pristine white sand, rich marine life, waterfalls, and other exciting tourist spots that will surely make your stay so memorable.

the stunning view from the veranda of Capt. Hook’s Red Parrot Inn

END_OF_DOCUMENT_TOKEN_TO_BE_REPLACED

After a hearty dinner at Penong’s Seafoods and Grills, we boarded a taxi going to Drifters British Pub and Apartelle located inside Nova Tierra Subdivision in Lanang. The apartelle with its affordable price and cozy ambiance is a nice place to stay for the weekend. 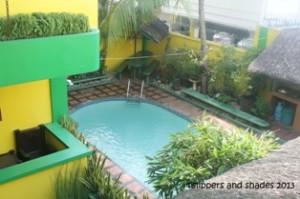 so inviting to swim