Apart from Mayon Skyline and Cagsawa Ruins, Hoyop Hoyopan Cave is another famous tourist spot in Albay that is a must-visit place. It is located in Barangay Cotmon in Camalig and is privately owned by Nuylan, Guerrero, and Nieva families. 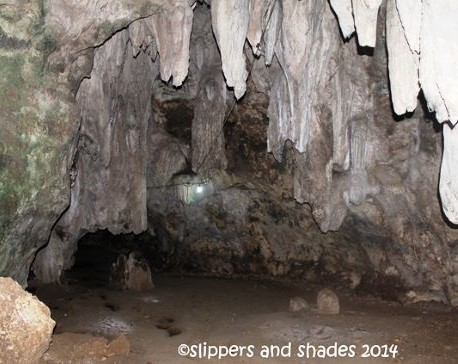 One of the passageways inside the cave 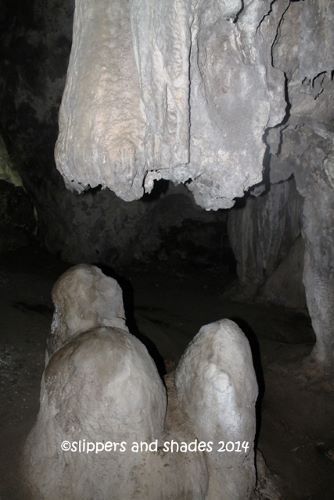 I wonder how many years would these stalactites meet the stalagmites?

Hoyop means to blow in Bicol dialect.  The interesting fact about Hoyop Hoyopan Cave is the guaranteed easy navigation adventure that kids and even lolos and lolas would not have a hard time walking around. And what’s more, it is so delightful to feel the cool breeze coming from the wind that blows gently inside the four openings. 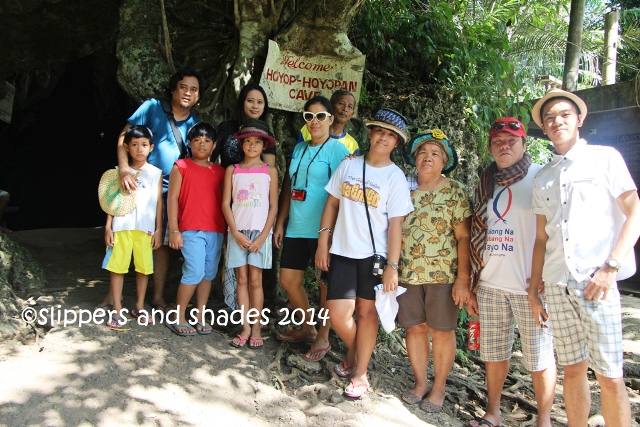 It’s nice to be back in this cave… now, with my brother and his family

It was in May 2005 when we first visited the cave. This summer of 2014, I enjoined my family, my brother, and his family to enjoy a caving experience as part of their first exciting Bicol escapade.  We rented a jeepney so all of us (18 to be exact including our relatives) would fit in. 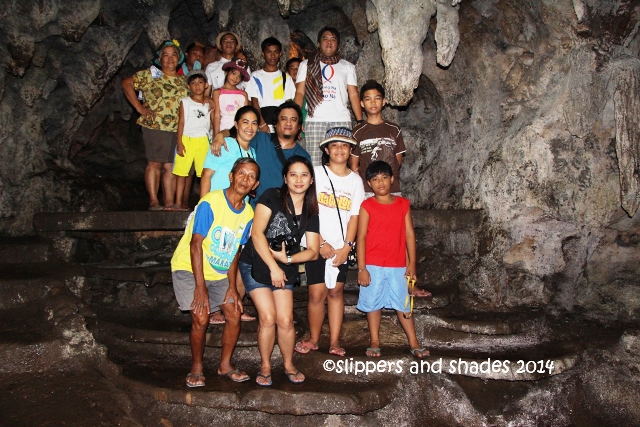 The excitement begins in this stone ladder

Travel time coming from Legazpi City took us almost an hour to reach the place. We climbed uphill to the main entrance. The standard rate for entrance fee is P300 maximum of 6 persons and in excess, P50/head. 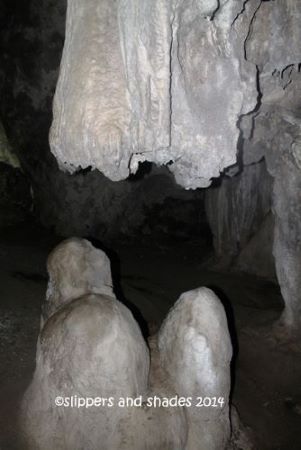 I wonder how many years would these stalactites meet the stalagmites?

I told the guide that the first time we went here we paid P100 only, no per head basis.  He didn’t count us all anymore and charged us P500 only. Thank you! 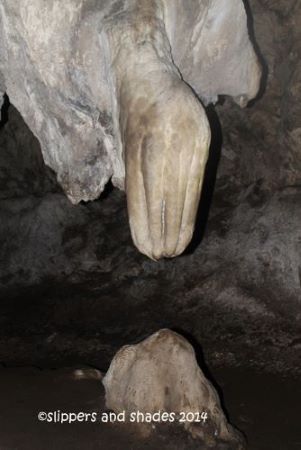 Before we enter, we were briefed by our tour guide of their restrictions: no vandalism, no drinking of liquors or beers, no destroying of rocks, and no dating! My little Shen repeated the word “dating” and asked me curiously, “Mama what is dating?”  It was my hubby who answered her while we were smiling at her innocent question. 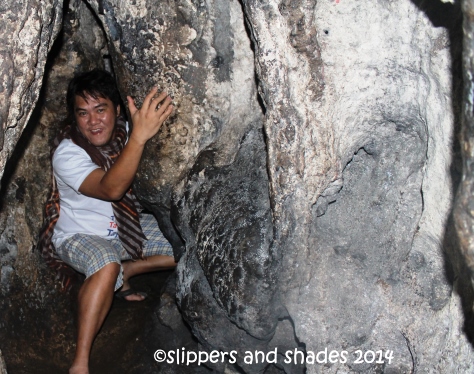 The narrow exit going to the second opening

We went inside the first opening and were greeted by a sudden gentle cool breeze. Wow! My buddies uttered with amazement and so we started exploring the dark chambers. Our tour guide was equipped with a flashlight and started telling us about Hoyop Hoyopan Cave. But before we proceed, he warned us to be careful not to bang on hanging rocks and walls along the way. 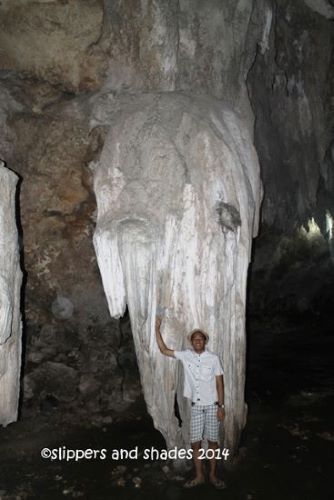 This is one of the amazing rock formations inside the cave

The cave was discovered during the Japanese occupation and served as a refugee camp by the guerrilla. It has seven major chambers but only three could be explored by visitors.  The first chamber will take 11 hours to explore and as of this date, no one ever completed the trek since it was explored in 1998. 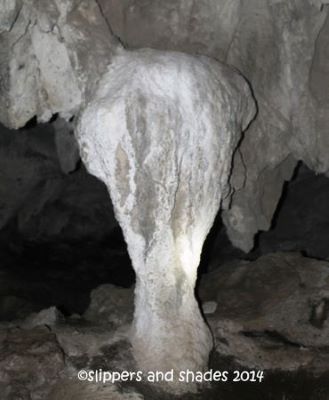 We navigated the second and the third chambers. There were nice pathways and mounted staircases around. There were incandescent light bulbs that made it convenient to walk on.

nice pathways along the way

The kids were entertained by the guide’s explanation of stalactites and stalagmites. And when the two mineral formations meet and fuse it creates a column. Going back to science class is exciting, isn’t it kids? Haha!. He was so informative about the history of the cave and was patient in answering our queries. 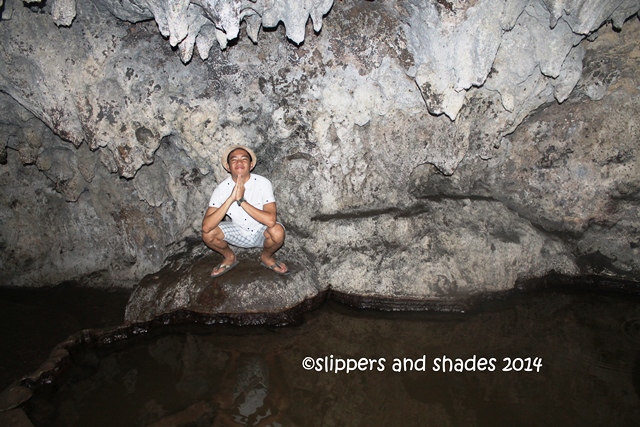 Pao was amazed by the pool coming from the ceiling

It amused us to see odd shapes formed on rock formations like the sexy woman, angel’s wing, grotto, snake tongue, hands, and even dinosaurs. We emerged to the second opening that leads to a grand vista, the beautiful Mayon Volcano, and the cool forest trees. 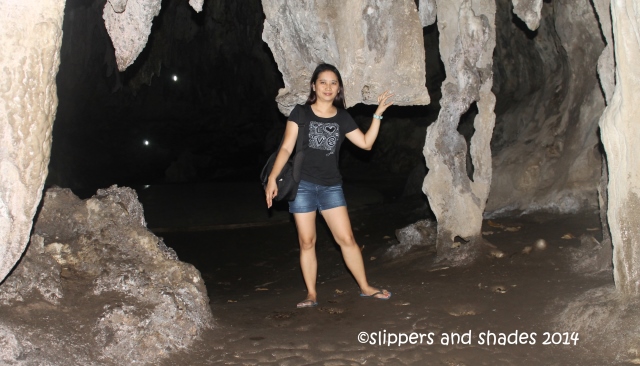 Yours truly and the amazing experience inside the cave

We entered into the third opening which is the burial ground of our ancestors, the early inhabitants of the cave.  Again, a cool breeze gave us a wonderful chilling sensation. There were man-made concrete benches for resting but everyone was excited to explore inside rather than sit. 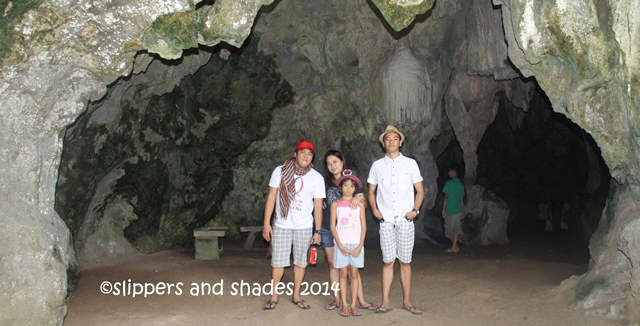 My family on the third opening of the cave

Earthen jars found in this cave dated 200 B.C. to 900 A.D. are now housed in National Museum in Manila.  The kids were fascinated looking at fossils of bone in one stone and skull in the other stone. 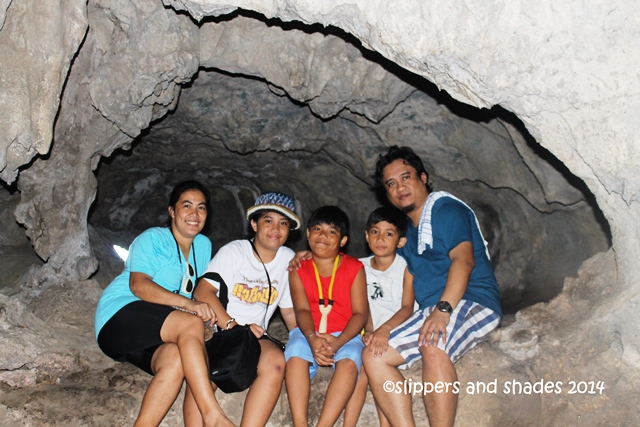 We stepped into the circular platform which was used as a dance floor by the party-goers during the strict implementation of Martial Law. There were fruit bats on the ceilings but surprisingly, there’s no stinky smell of guano in the area. This is so because the cave was well-ventilated. 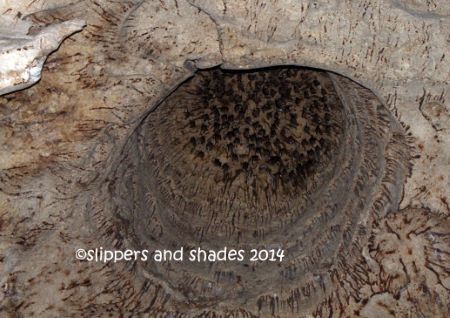 The bats on the ceiling

Added interesting sights which were not mentioned by the tour guide from our last visit were the shining crystals and the coral deposits. The crystals glistened when spotted by the flashlight. The coral deposit is a piece of evidence that the cave was covered by a large body of water a long time ago.

the magnificent crystals that glistened when spotted by a light

Some amusing shapes here were the skull on the roof, chicken leg, elephant tusk, and Casper the friendly ghost. We emerged into the fourth but small opening and again Mayon Volcano and verdant vegetation completed our delightful caving experience. The sun was up but it was so cool in the area. We went downhill and were back to the main entrance. 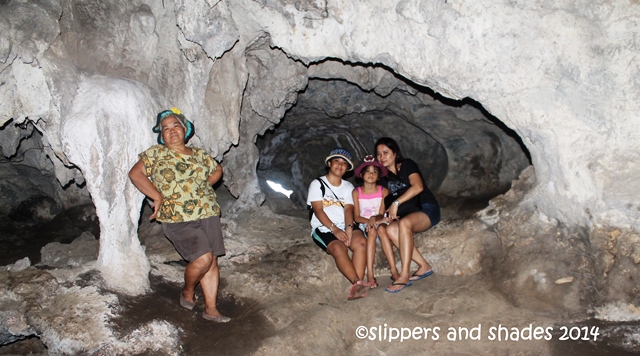 We’re getting ready for the final tour

Shen and Ish at the last and fourth opening,. It was small but everyone was able to get out of the cave.

It was fun to walk around, squeezed ourselves to narrow exits and be amazed at how God created these wonderful rock formations.  It took our tour almost an hour because of curiosity and lots of picture taking. 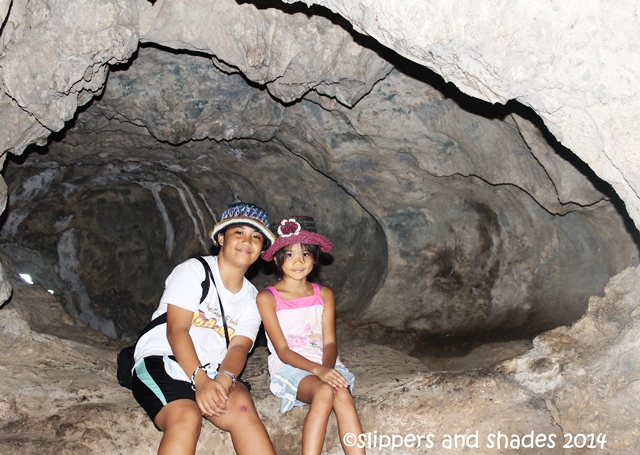 Ish and Shen on the last and fourth small opening.

The cave is not for tourism alone but it plays an integral part to the locals as they take refuge inside during rampaging typhoons that frequent the region. 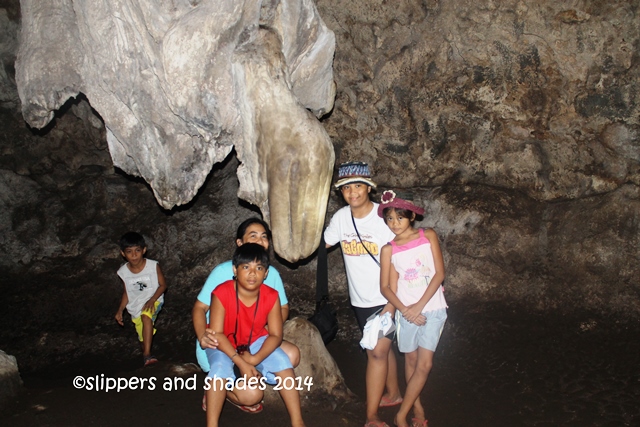 For me, giving tips to a local tour guide is recommended because you will not only enjoy the journey but you will be educated too esp. the kids.

Take a jeepney ride in Legazpi City bound to Camalig town proper (P25) then go to Camalig Market.  As of this date, jeepneys en route to the cave have two-day trips only which operate on Tuesday and Friday (P15).  Tricycle is on a daily trip, P20 if drop to the entrance, and P15 on a turning point.  A special trip is P100 for one-way and P200 or P250 for two-way.