My tour of Batanes was a far cry from my previous trips to the different places in my country. It lags so much behind the modernization that it does not have luxurious hotels and huge shopping malls to boast. But while it is devoid of modern amenities, the island province emanates charm that soothes, mesmerizes and captivates. Now, that we are in our last leg of our tour, we will savor every minute to feast on other breathtaking sights and to capture memorable memories. 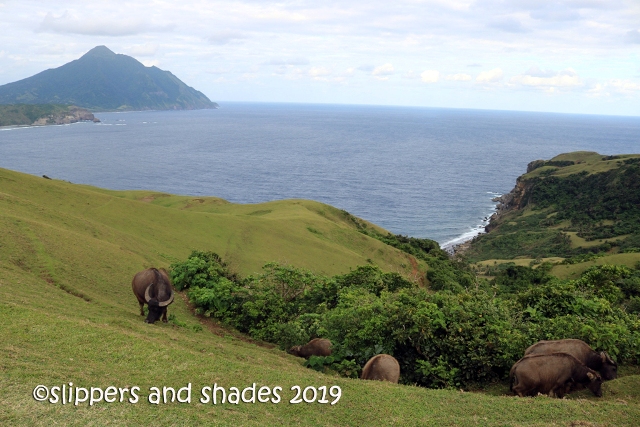 Marlboro Hills is the most stunning scenic spot in South Batan

We had experienced the irresistible charm of North Batan yesterday, the shortest tour that we did it in four hours only. We were advised to visit it first as it was less overwhelming. Read my story here->North Batan Tour in Batanes: Stunning Places to Explore 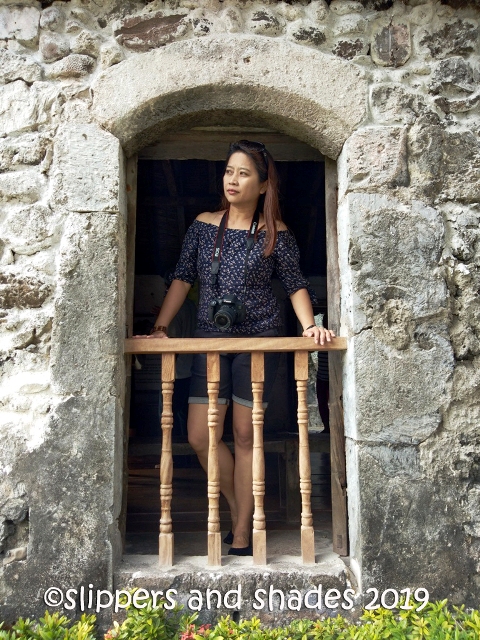 the surreal feeling inside the oldest stone house in Batanes

This morning, we set foot in Sabtang Island, our most anticipated tour. We were back to the distant past as we strolled in two tranquil villages dotted with centuries-old stone houses. Read my story here-Sabtang Island, Batanes: Exploring its Captivating Beauty

South Batan Tour is our second most anticipated tour. This will again lead us to another worthy journey to “Breathtaking Batanes”. This tour covers the three municipalities of Batanes-Ivana, Uyugan, and Mahatao. We will be squeezing 19 tourist spots on a half-day tour. 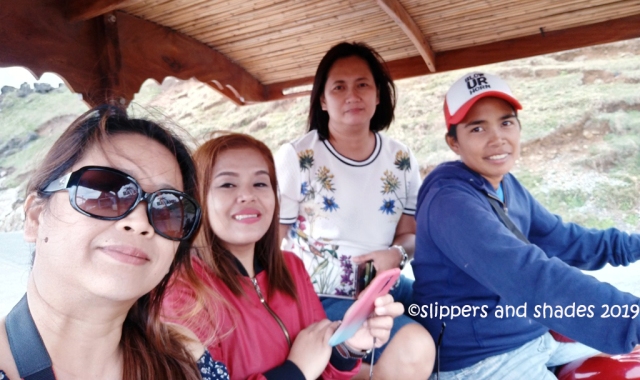 Me, Joyce, Shiela, and Beth Dando, our Tour Guide who is so good in awrahan photo

Here are the awesome places we explored:

San Jose de Ivana Church also known as Ivana Church is located in Ivana fronting the Radiwan Port. The present structure and convent were built in 1795 while the bell tower was constructed from 1814 to 1817. It is near the Honesty Coffee Shop and the Old Spanish Bridge. 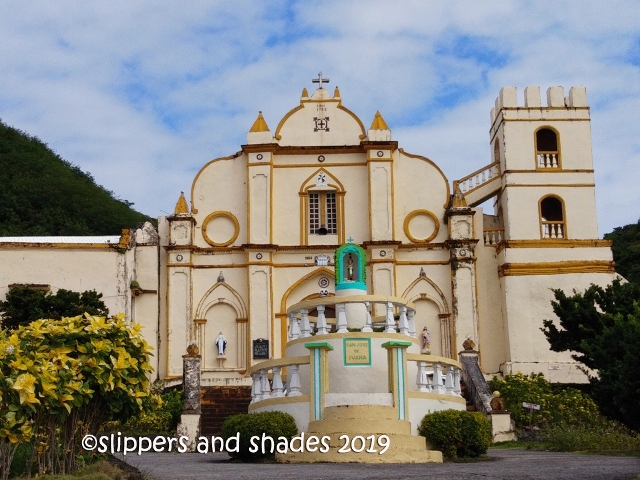 One of the five existing old stone houses in Batanes is The House of Estrella, more popularly known as House of Dakay. Luisa Estrella originally owned the house built in 1887. It is made of stone, lime, sand and corals. Like most of the other traditional houses in the province, its roof is thatched cogon and is replace every 25 to 30 years. It has wooden floor and narrow window. 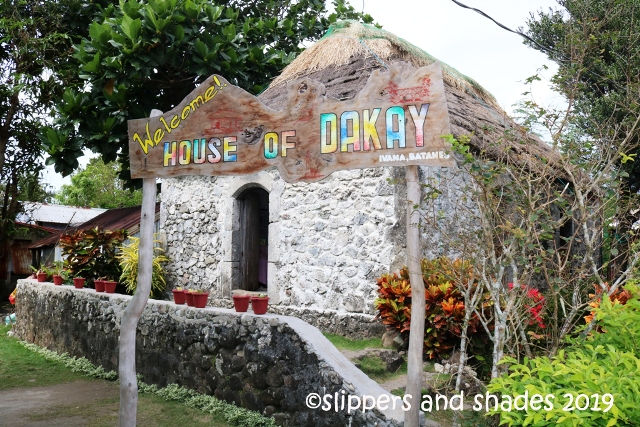 It is amazing how the house survived the deadly 8.3 magnitude earthquake on September 13, 1918, and all the strong winds and heavy rain that came to the island. While the other four have newer structures, House of Dakay is still in its original form, highlighting Ivana’s enduring culture and tradition. 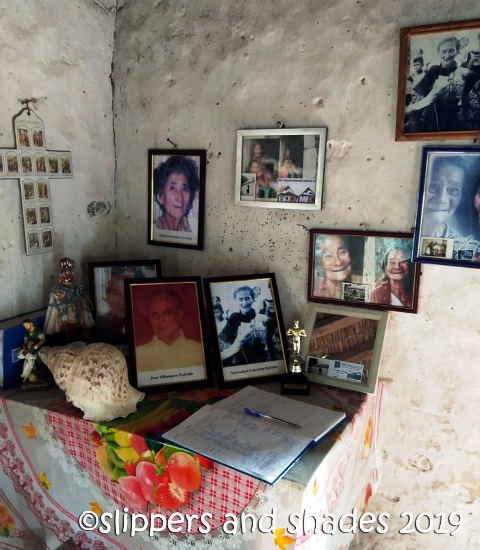 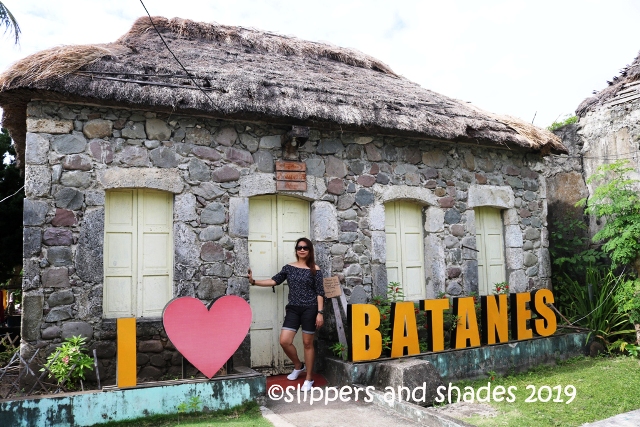 Honesty Coffee Shop has no storekeeper. You will pay for the items you purchased, log it in the logbook, and drop your money in their cash box. It is as simple as that. However, you cannot get your change anymore as you drop your payment. Either you donate it or pay in the exact amount. 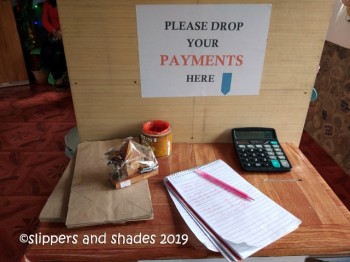 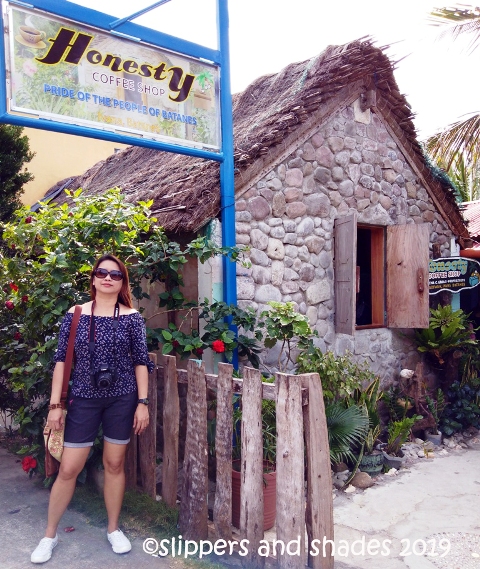 the store where it is too small for dishonest people

One of the remarkable remnants during the Spanish colony is the Old Spanish Bridge or the Tuhel Spanish Bridge that is made of lime, stone, and sand. Building the bridge was a brilliant feat of the Spanish technology considering it is still in good condition and used by people and vehicles to this day. 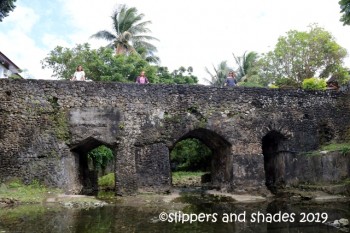 San Antonino Parish is a small church located in Uyugan. Next to Sta. Rosa de Lima Church in Sabtang Island, this is the next smallest church we visited in Batanes. 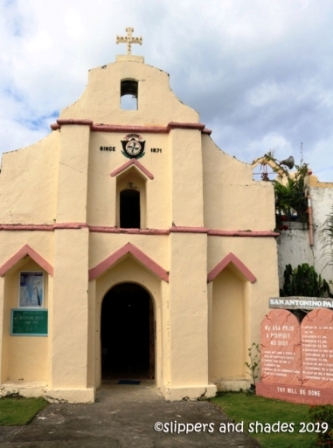 San Antonio Parish is one of the smallest churches in Batanes

Another remarkable view to captivate one’s senses is the Mochong Viewpoint in Uyugan. It is a mini rolling hill situated just beside the main road. The entire grass was like that of Chamantad-tinyan in Sabtang Island, it is so clean as if naturally mowed by nature. 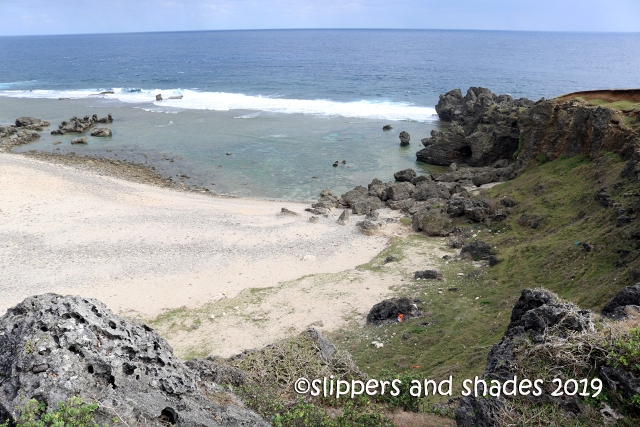 At the end of the hill is the boundless sea where waves crash onto the rocks and shore. It is nice to sit awhile and get lost watching the remarkable sight. Because it is less crowded, we had a wonderful time doing the jump shots. 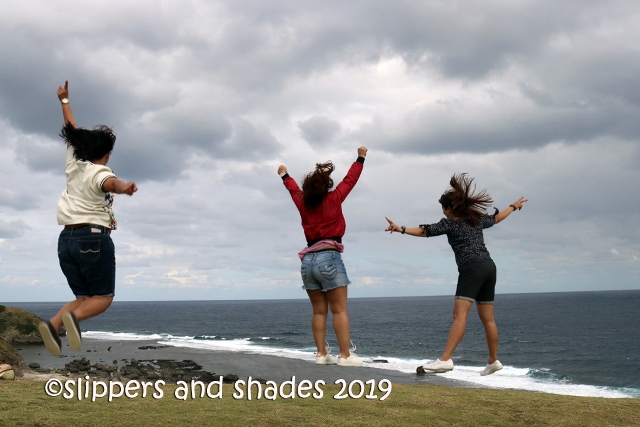 our happy moment in this mini rolling hills

A tsunami that hit the island in the 1950s devastated the barangay. What remains are the roofless old stone houses located near the beach. We were not allowed to enter the ruins because there were already people residing near the area. Sooner or later it is not a ghost barangay anymore.

Since we were not able to visit the Ruins of Songsong, Beth brought us to this cute and clean old stone house in Uyugan for short viewing and picture taking as well. 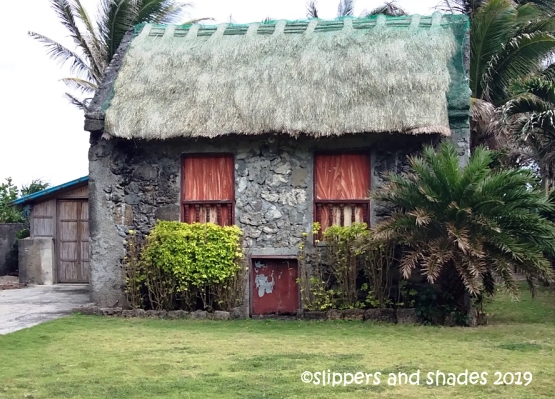 This magnificent rock formation that overlooked the Pacific Ocean was naturally carved by the wind and the sea. Indeed, a feast in the eyes. The road where we passed cuts a small hill and beside it is the signage “Blow Your Horn” where we had a pit stop for some decent photos. 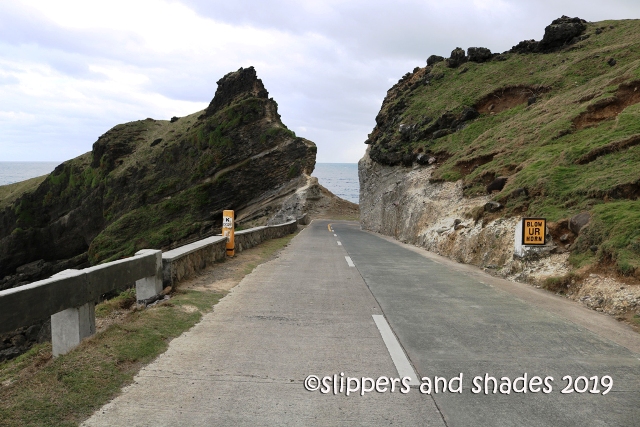 Near the rock formation is where you will be greeted by “Welcome to Madangay”, an entrance to Alapad Hill, a popular area where the movie “Hihintayin Kita sa Langit” was filmed. It starred Richard Gomez and my favorite beauty icon, Dawn Zulueta. 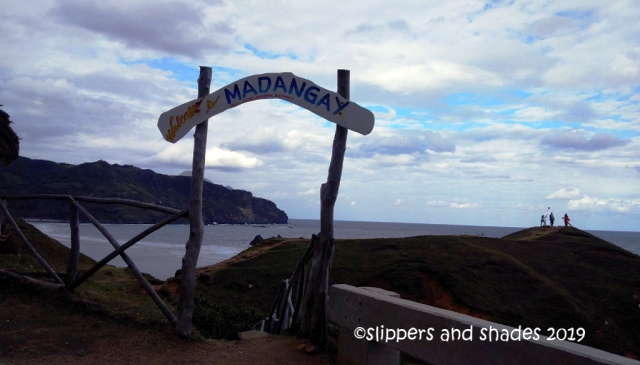 Located near the rock formation is the Old Loran Station (Long Range Naval Station), a US facility that housed the US coastguard for 20 years. It is now the National Museum which is set to open soon. 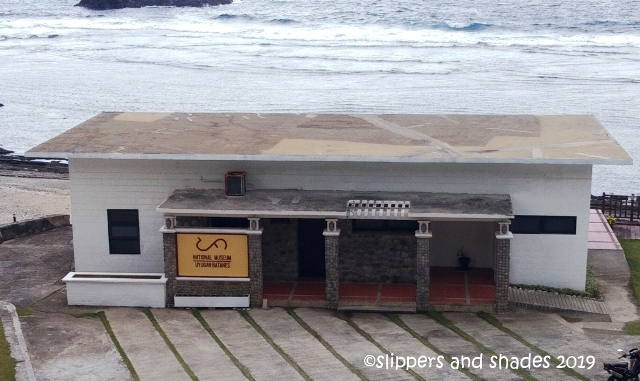 Barangay Imnajbu was the first place of Christianity in Batanes. It was in this barangay where the first holy mass was celebrated and where the first baptism was administered. Its patron saint is San Lorenzo de Manila, the first canonized Filipino saint. 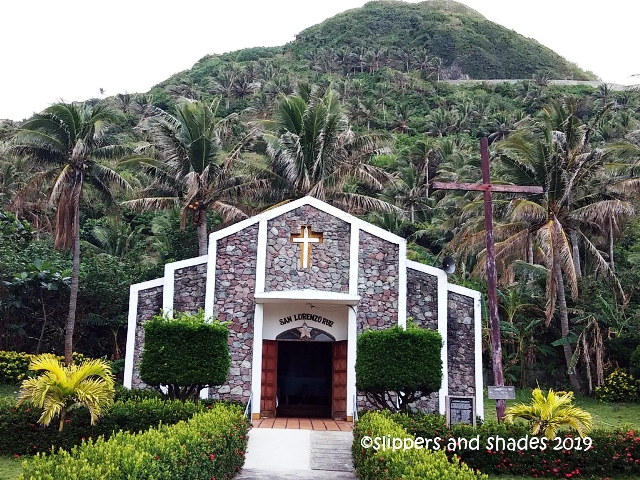 When I first saw the boundless rolling hills I did not mind taking pictures yet of the beautiful sight. I marveled at it. It was like a postcard picture view. So stunning! Everything is verdant and green. There is a good view of the Pacific Ocean, Mt. Iraya, the grazing animals, the slopes, and the awesome Bermuda-like grasses as if naturally mowed by nature. 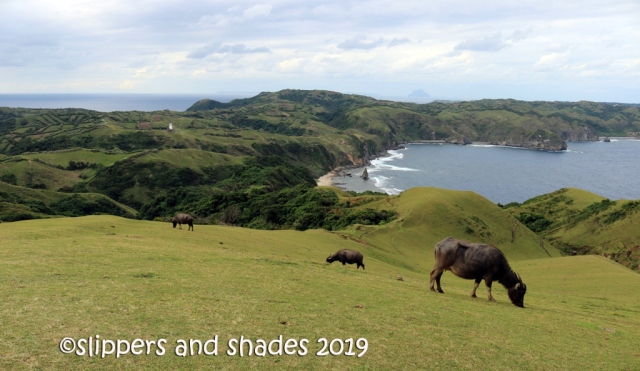 Marlboro Hills has a distinct character not found in some other places. This hill is one of the most beautiful natural wonders that I had seen in my travel around the country. I wish I will stay more and spend the night there, lying on my back on the grass and watch the lovely sky. 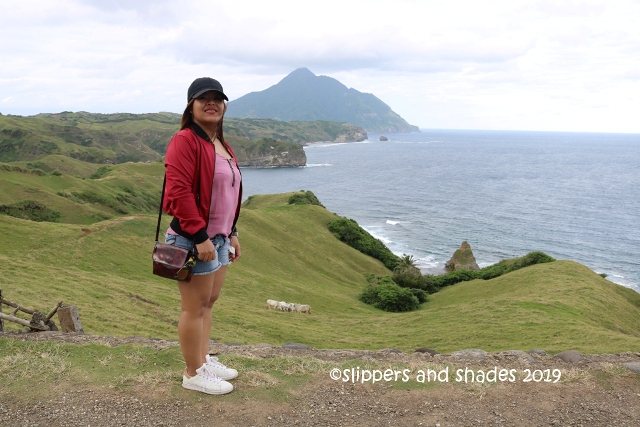 Just like me, Joyce can’t get enough of the stunning beauty of Marlboro Hills

Marlboro Hills reminds me of Marlboro Country, an American tobacco advertisement featuring a handsome cowboy in a scenic wild terrain. This is the most photographed scenic spot in South Batan. Walk, run, and sing Julie Andrew’s song “The Hills are Alive.” Tayid Lighthouse is seen from here. 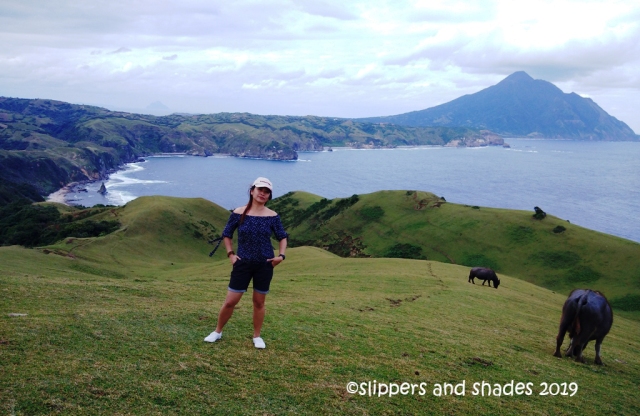 In getting to the Lighthouse, you will first marvel on the verdant hills and hedgerows, locally known as liveng, tall tows of trees and grass that serve as a crop protection against wind and typhoons. It looks like a giant maze from afar. Another wondrous sight that will make you stop and gaze a while.

Tayid Lighthouse or Mahatao Lighthouse is one of the three lighthouses in Batanes and I was so happy that we were able to visit all. They resembled in appearance only that Tayid Lighthouse has a hexagonal shape from its base up to the tower. It is perched imposingly on a hill facing the prodigious Pacific Ocean. 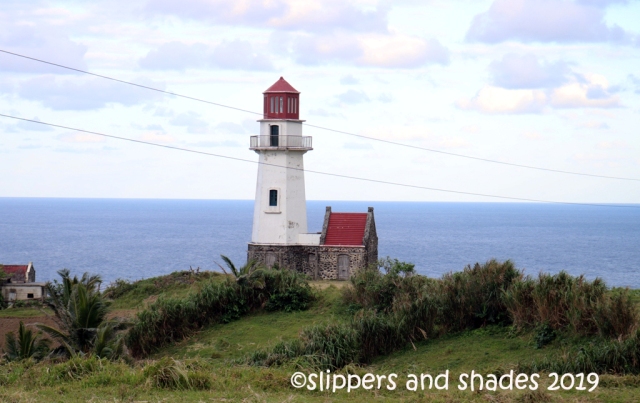 A new and beautiful church was built after a very strong typhoon in 1873 destroyed the old one. Designed in Baroque style, its former cogon roof was changed to galvanized iron. The church together with the convent was colored white. Its outside structure was captivating no wonder it was designated as a National Cultural Heritage Treasure by the National Commission for Culture and the Arts (NCCA) on July 31, 2001. The church’s patron saint is Saint Charles Borromeo. 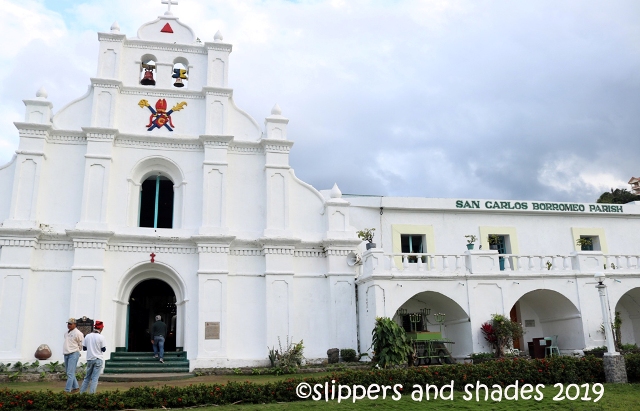 Mahatao Port and Boat Shelter is a small port built to protect the small-island vessels and boats against the inclement weather. Boats are sheltered against the strong waves. 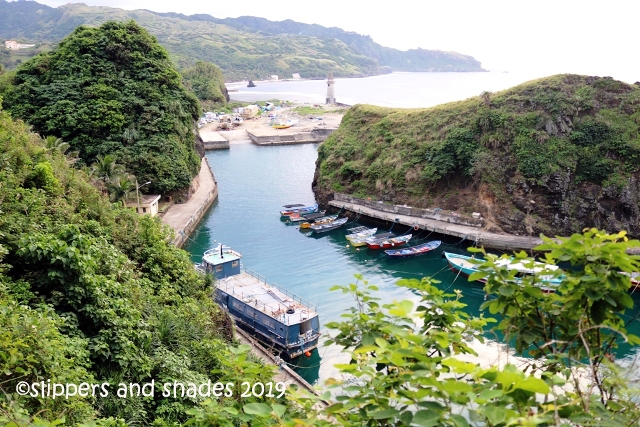 This is our last stop in our tour so aside from picture-taking; we sat for a moment on stone benches to admire the view. From the view deck, one can overlook the cliff that meets the sea. This is where the stunning sunset awaits travelers. As of our visit, visitors are not allowed to descend on the rocky coast because a visitor died while swimming on the water. 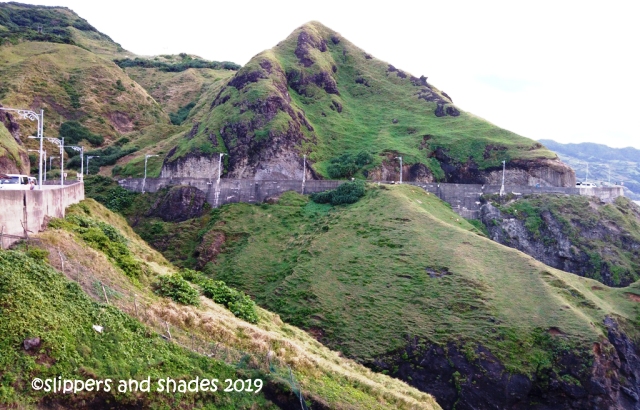 the spectacular hills just beside the main road

That ends up our South Batan Tour.

The scenery was truly breathtaking. All the wonders and charms of Batanes – the rolling hills, terrains, seascapes, old stone houses, historical and cultural landmarks, the lighthouses, the friendly and welcoming people, its intimate closeness with nature. All these conspire to give the tourists unforgettable memories and fulfilling experience of Batanes that one should not miss.

Tour rates: Maximum passengers for the tricycle are only three. Right now their basic standard rate for this tour is:

We are budget travelers and Nanay Cita’s Homestay is our choice. They have a cheap fan room but their location is near the airport. It has no free breakfast but they can cook for a certain fee. Homestays and inns in Batanes range from Php350 to Php5,000. 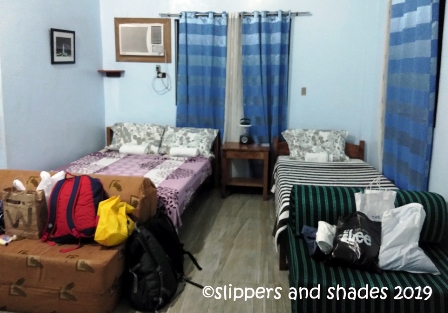