Just off the northeastern shore of mainland Singapore lies the tiny island called Pulau Ubin. It was pretty amazing how a highly urbanized country retains a rustic getaway where one can reminisce the past and enjoy the charm and simplicity of the olden times. On my third day in the Lion Country, I braved myself visiting Pulau Ubin alone which I considered the most anticipated part of my second visit to Singapore. 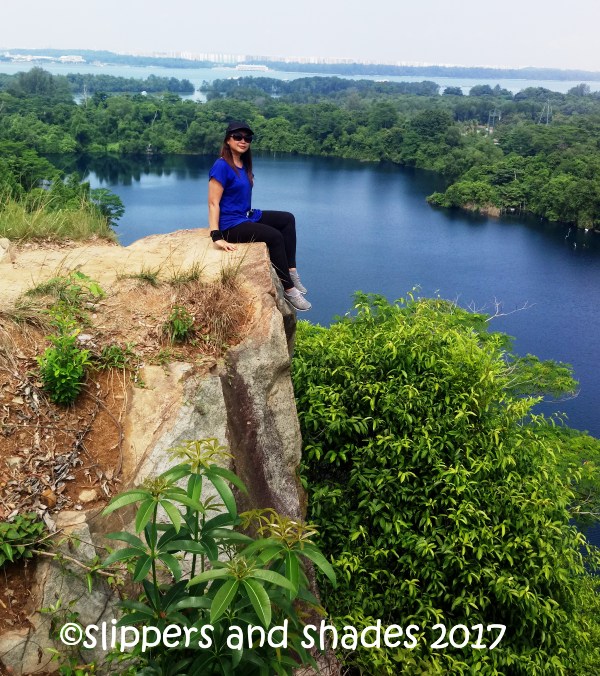 Yours truly, sitting on Puaka Hill, the highest point in Pulau Ubin

I was so grateful to Lyn, my sister in law for telling me about this island which they visited with her family last summer as part of their vacation in the country. I made a Google search about Pulau Ubin and found out that for nature lover and venturesome people like me, this island will definitely give a unique escape from the grand buildings and glitzy avenues of Singapore.

Pulau Batu Jubin which means granite stone island is the original name of Pulau Ubin but over the time it was shortened to what we now know its name today. This 1,020- hectare island is home to Singapore’s last villages or “kampongs” and is shaped like a boomerang. 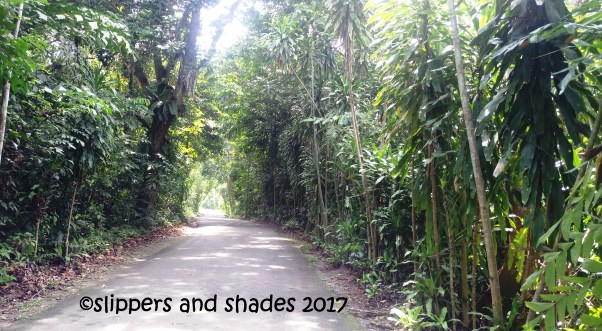 When John Crawfurd, the Second Resident in Singapore landed on the island in 1824 he declared it a British territory. Major construction projects led to the demand for granite and soon mining operations had started. Other than this, the residents delved into other businesses like prawn farming, rubber tapping, and coffee planting. 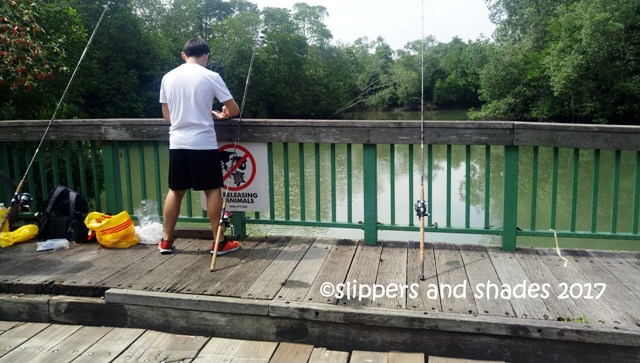 The mining industry had boomed and it attracted more people to relocate to Pulau Ubin. Schools had been opened, various temples were built and community service was established.

But in the 1970s the mining industry declined and the granite quarries had closed. Schools were closed, rubber tapping ceased, temples were relocated to the mainland and residents began leaving.

As of this time, few people are now living on Pulau Ubin. But with its significant history, untouched nature, lush greenery, rich and preserved wildlife, visitors had increased over the years. Singapore had retained its culture and preserved the island from urban development thus making it the country’s last frontier. 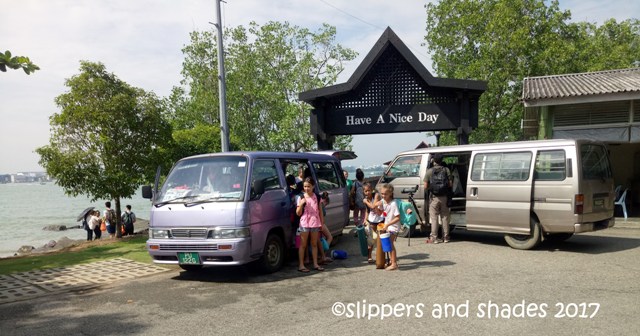 hired vans for one day tour around the Island

The thrill of getting there alone

I was instructed by my brother Choy and Lyn on how to go to the island. Honestly, it was so easy. This is my first time that I will travel alone by bus. I had a packed lunch, water, and crackers to save the day. Before I set out for my adventure, I prayed to God for my safety. 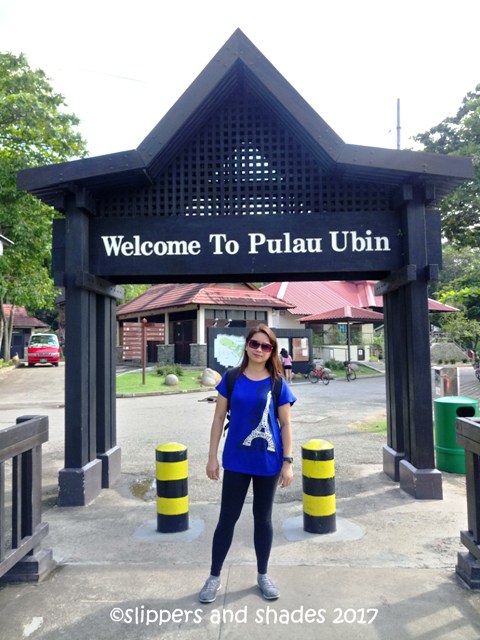 With confidence and faith in God, I boarded Bus 2 (coming from Simei) in getting to Changi Village Bus Terminal which is the terminating point for bus routes in Changi Village. During the trip, I met three fellow Pinoys who will be going to Pulau Ubin too. They haven’t eaten their breakfast yet so they headed to the Hawker Center and I set off for a stroll to Changi Village hoping to see each other on the island. 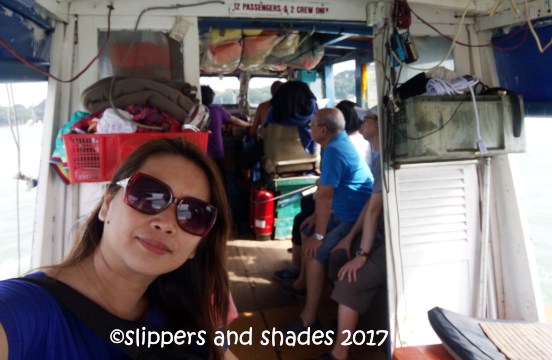 Inside the bumboat with fellow passengers

The amenities found in Changi Village are the hawker center, shops, market, bus terminal, ferry terminal, Sea Sports Club, and the Walkway to Changi Beach. There are also the HDB low-rise flats and the Changi Village Hotel. I was aiming to take a quiet walk on Changi Boardwalk and stroll near the Change Beach but I will be running out of time so I have to go now to Changi Point Ferry Terminal. 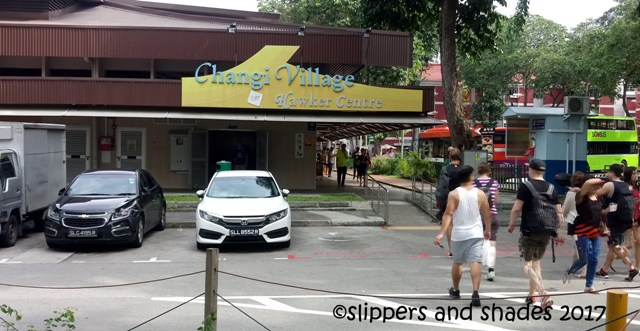 The only transportation in getting to Pulau Ubin is through a bumboat. Getting down the ferry terminal you will see a right arrow pointing to Pulau Ubin and to the left is Pengerang (Johor, Malaysia). They have a well-organized system of loading passengers so all I have to do is wait for my turn to ride the boat in the waiting area.

It was Sunday and tourists kept coming in. The operator waited for twelve passengers to fill in and later he collected the fare which is S$3.00 per head and per trip. People who do not want to wait may pay S$36.00 and can leave without waiting but it is for one way only.  The boat operates from 5:30 am to 9:00 pm. 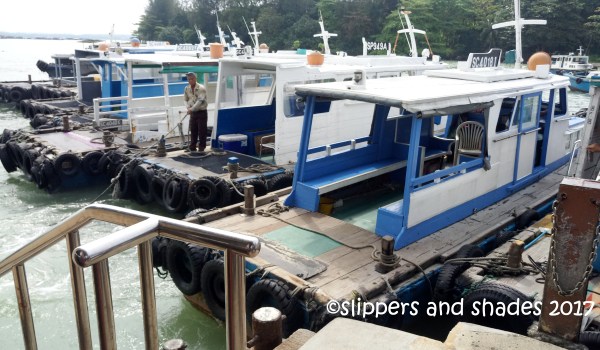 these are the bumboats use in crossing the island

I can’t sustain my excitement as we set off. The water trip lasted for ten minutes only. Stepping into the island was a breeze. Few distances from the port was the welcome signage “Welcome to Pulau Ubin” It was no longer an awkward feeling approaching tourists to take me a picture along with the signage. I started to get used to it when I was also in Hong Kong. I headed inside with a broad smile on my lips. I was so grateful for this stress-free day, to the sunny weather, and to those nice people who smiled back at me. It’s time now to explore Pulau Ubin!

I was so excited! 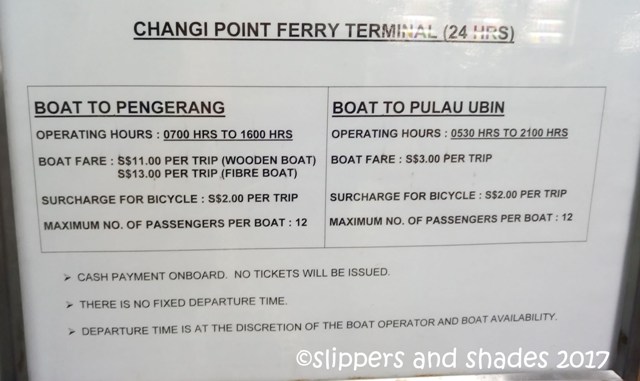 There were a lot of exciting outdoor activities to do inside Pulau Ubin like biking, walking, picnic, kayaking, camping, nature tripping, bird watching, photo shooting, and fishing.

I will be going to Chek Jawa Wetlands so I will be riding a bike in getting there. Sounds exciting right? My brother warned me not to bike solo for my safety. But knowing there were plenty of visitors today and it is so safe to bike in Pulau Ubin even for a girl like me so I will brave this activity. 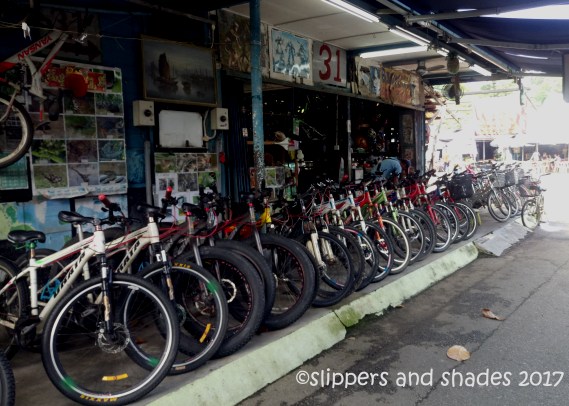 one of the stores catering bike rentals for visitors

There were several stores offering bike rental at Kampong Ubin (near the main entrance) with prices depending on the style and condition of the bike. I was surprised when the old rate of S$5.00 was raised to S$25.00. There were the cheaper ones which cost S$15.00 but it is still so pricey for me. 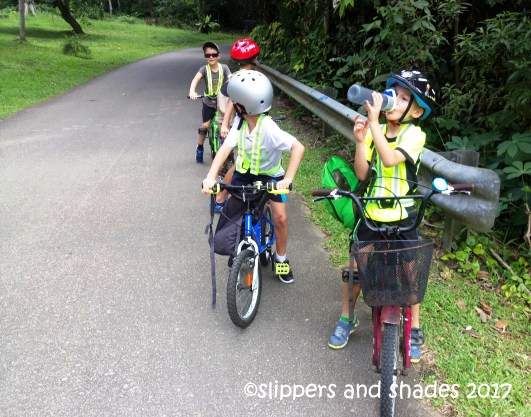 I was told there was the cheapest rate of S$8.00 in the farthest corner of Kampong Ubin. While I was on my way there I was delighted to see again those people I met on the bus. But they told me they will not go on biking and they will not go to Chek Jawa Wetlands because it was located in the eastern end of the island, meaning it is so far to take a walk. 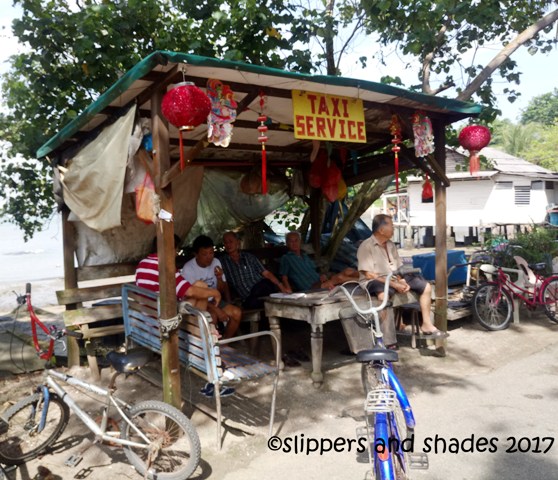 the locals and drivers of the van for hire

It seemed these three people are nice to be with so I decided to join them. I was so happy to meet Pinky, our tour guide, Rachel and Mavie.

These are the places we visited through foot navigation.

The community had put their efforts to create this area of about a football field in size to conserve and showcase butterflies. More than fifty butterfly-attracting plant species are planted on the landscape. It was so nice seeing butterflies freely fluttering around. 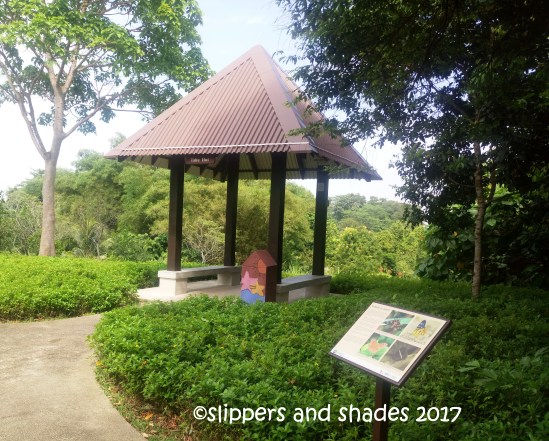 One of the exciting activities on the island is camping and Jelutong Campsite is one of the campsites nearest to Ubin Jetty. Camping overnight is allowed but campers should register at the Police Post and apply for a permit. 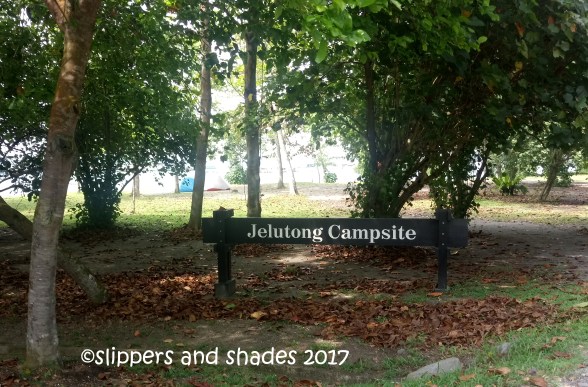 The trail was developed to showcase the cultural heritage of Pulau Ubin and engage not only the sense of sight but the other senses as well through the different plants the villages grew. What I enjoyed here is walking around to see numerous interesting ornamental plants, medicinal herbs, fruit trees, and other plants that can be seen along the way. 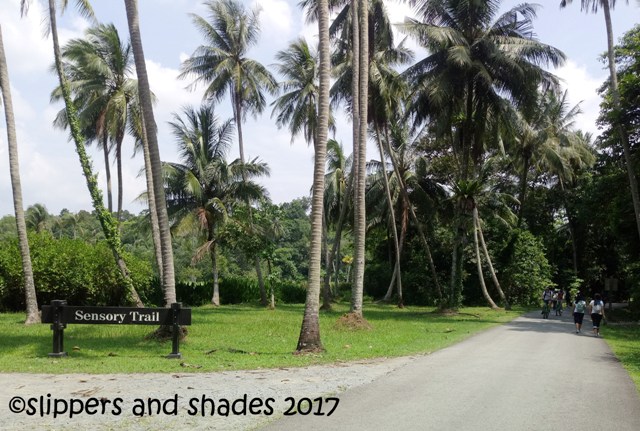 I was mesmerized to see this beautiful and serene lake which was the old granite quarry. This is one of the five quarries in Pulau Ubin but its proximity to the main village and its scenic view attracted tourists to stop and take pictures. As of today, this is a habitat of herons. 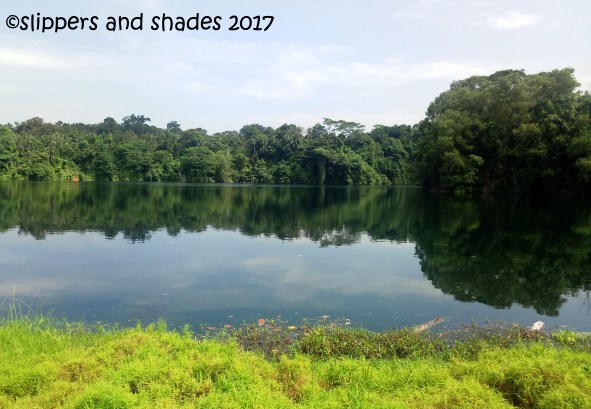 I savored the quiet moment as we were looking at the stillness and tranquility of the entire lake. It was simply amazing!

They say the best time to visit Puaka Hill, the highest point in Pulau Ubin is nearing sunset to be captivated by the glorious setting of the sun and eventually capture a stunning photo. But since we were on a day tour only we went there and enjoyed looking at the picturesque view of Ubin Quarry, mainland Singapore, and even Malaysia while standing on the edge. The hike coming from the road is about ten minutes only. 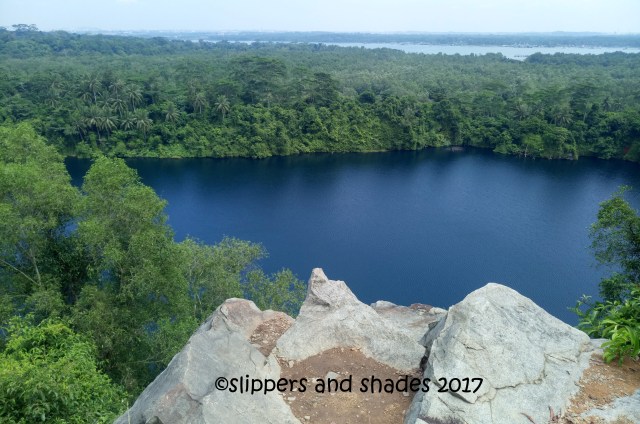 Puaka Hill may not be as high compared to the previous mountains I climbed in my country, but the scenery is so breathtaking. It was peaceful and beautiful!

It was midday but the scorching heat of the sun wasn’t disturbing yet because of the lush greenery along the way. It was so serene and peaceful walking on the paved road. There were lots of bikers, young and old.

I thought this is the end of our visit to Pulau Ubin but I was so happy when Pinky suddenly declared, we will proceed to Chek Jawa Wetlands.

my new friends I met inside Bus No. 2 namely: Rachel, Marie, and Pinky. I had a great day with you guys!

The first half of our adventure was definitely one for the books and I can’t sustain the thrill and excitement as we set out to our next.

How to get there from mainland Singapore:

As I’ve said it is so easy and convenient to go to Pulau Ubin. From mainland Singapore, ride the MRT, alight at Tanah Mera station then take Bus No. 2. You will never get lost because the terminating point is the Changi Village Bus Terminal. Walk your way to Changi Point Ferry Terminal and ride the bumboat.