We ran out of time to drop by at Palawan Beach because we spent one whole day frolicking on rides and attractions at Universal Studios during our first family visit in Singapore. In my next visit in the country, I was happy that I set foot on one of its finest beaches. 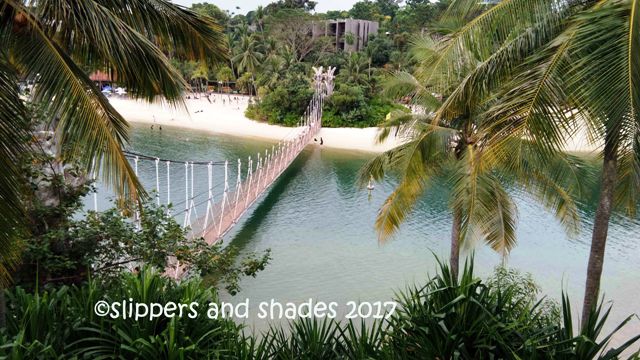 Sentosa Island has three beaches to enjoy with the whole family, friends and colleagues. These are the Siloso Beach, Palawan Beach and Tanjong Beach. But all of these are man-made only which were formed at the edges of newly reclaimed area.  They imported sand from the neighboring countries. 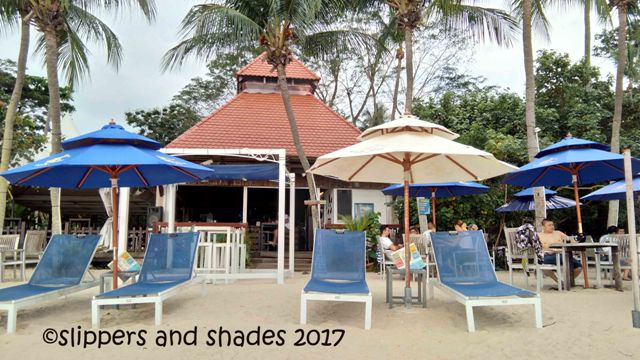 Among the three, I chanced to visit two beaches only, Siloso and Palawan  with my sister-in-law Lyn because it was already late in the afternoon and we will meet my brother after his office work for a hefty dinner. Yes it should be so heavy because it was so tiring exploring the whole Sentosa Island hahaha! 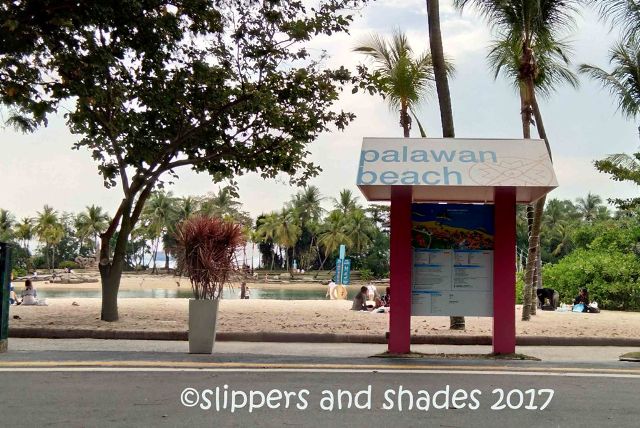 this is the jump-off point of Palawan Beach

We wanted to be so adventurous so we first explored Siloso Beach by riding the cable car through Sentosa Line. The beach area was wide that we felt tired walking and roaming around. When we had our fill of the sights and attractions, we boarded the cable car again and alighted at Imbiah Lookout Station.

Next, we boarded the Express Train and alighted at the Beach Station. We took the Beach Tram ride and after passing three stations, Palawan Beach was now looming on our sights.

Both beaches have incredibly fine and soft creamy white-sand but each has different uniqueness to boast. Between the two, I was amazed more of Palawan Beach. 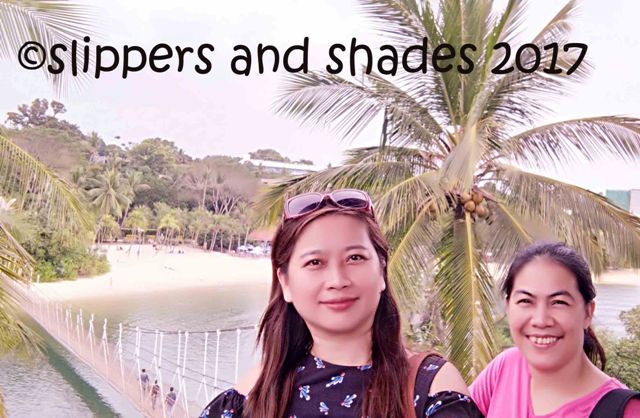 Palawan Beach with its sandy area of around 3.2 km was dotted with more palm trees and shrubs making it more tropical.

The Suspension Bridge going to Southernmost Point of Continental Asia

The Pirates of the Caribbean-style suspension bridge leads to an islet that is said to be the southernmost point of Continental Asia (closest point to the Equator). Lyn and I had a hard time crossing the bridge because of the traffic. Yes, it was packed by visitors going in and out of the islet. But when we reached the islet we were rewarded of the tranquil view of the Singapore Strait with its crashing waves. 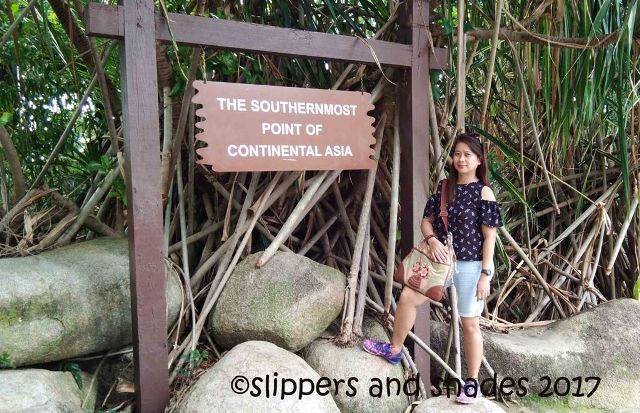 We took the four flights of steps in getting to the top of the wooden observation deck. The panoramic view of the entire beach was mesmerizing. The view and the wind were so refreshing that I wanted to lie my back in a hammock and sleep. But there was no hammock there, it was just purely an imagination. 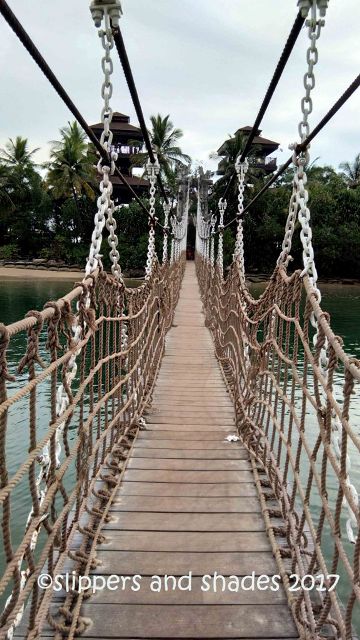 Palawan Beach has less crowd because it has fewer activities to deal with and a few bars to enjoy especially at night. Most visitors frolic on water, some were visiting the suspension bridge while others are having a quiet moment sitting on the sand or just lazing around. 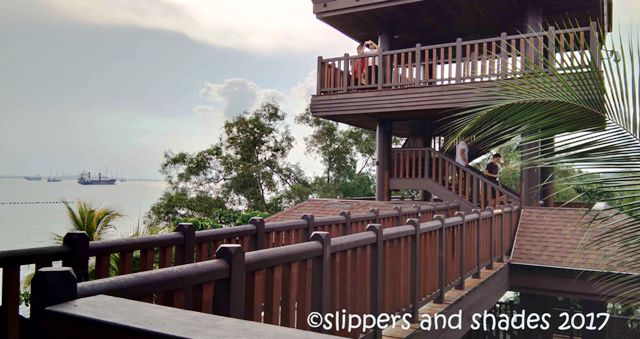 This attraction ceased all its operations in December 2016 but was reopened due to popular demand. Its main feature is the Pirate Ship now known as Palawan Pirate Ship. This is located near the beach which features pools, slides, and fountains. Kids will surely enjoy frolicking in this fun water play area. There are picnic areas in the vicinity with eateries and 7-11 convenience store.

The water was clear until the waist-deep level only. When we crossed the bridge the water gets murky as it gets deeper. But still, there were swimmers on the shallow part. They were having fun basking from the sun.

Since the three beaches are connecting each other, some venturesome people prefer to explore it by walking coming from the Beach Station. But if this is not your thing, you may take the Sentosa Express, alight at the Beach Station, and look for the Tram Station. From there, find the signboards that will help you get around the three beaches. Look for the blue line queue and ride the Bus Tram. It is free of charge. 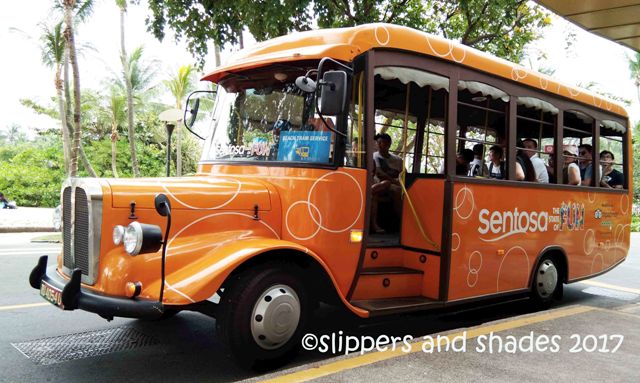 Tanjong Beach is just one tram station away from Palawan Beach. You may either take a walk or ride the tram to get there. 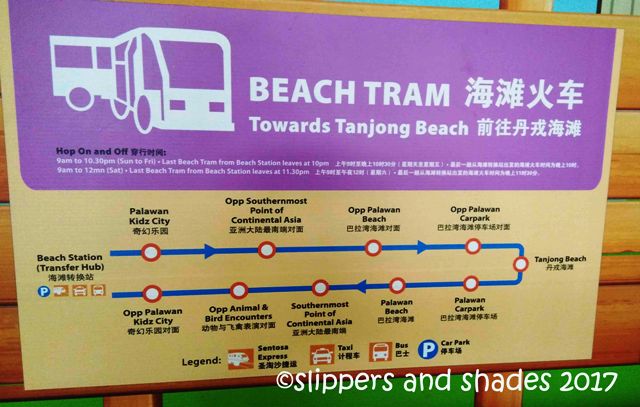