One of the favorite and famous hiking destinations near Metro Manila is Mt. Maculot situated at the heart of Cuenca in Batangas. It has three focal destinations: the Grotto (510 MASL), the Rockies (706 MASL) and the Summit (930 MASL). For the venturesome trekkers, they choose the traverse trail which will start at Rockies to Summit and ends at Grotto (4/9 difficulty). Some choose the Rockies only (3/9 difficulty). 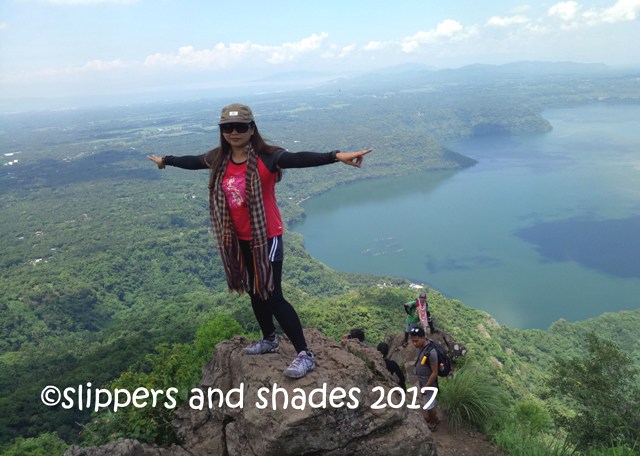 We took the regular trek where our trailhead is Grotto then to Summit and to the Rockies as our final leg.

My last climb was in February this year in Mt. Talamitam. After three months I was itching to go climb again. I was thankful that I found a new trek buddy, my former office mate Lhen Pelenio who is always available anytime of the week. Since we’re both casual trekkers, we chose a minor climb at Mt. Maculot and together we joined a group. This is my first time to mingle with new faces, and I could say, the experience is once again, one for the books! 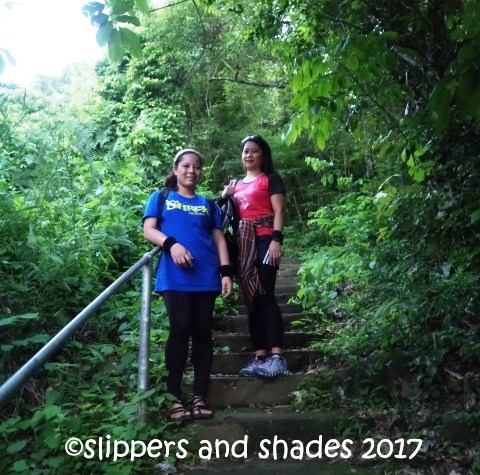 with Lhen, my new trail buddy as we took the flight of steps in getting to the Grotto

Our meet-up place was in Jollibee Cubao, Quezon City at 1:30 am. We met Jaymar, the organizer of the group and our new trek buddies. We were six girls and nine boys. I noticed I was the oldest and most of them were half my age! Haha!

By 2:00 am we head off to Batangas. Upon reaching the town of Cuenca we had our breakfast at Ogie’s Kainan to eat hot lomi, a popular dish in the eastern part of Batangas. After we had our fills, we set out to the jump off point in Barangay 5. We were met there by our two local trail guides namely, Mark Cleo Pasia and Sonny de Lima.

The Grotto (Our Lady of Lourdes)

It was still dark and the town was asleep as we started our trek by 4:55 am. The ascent through the flight of stone steps was moderately easy. We stopped at every station of the Cross and had snapshots. But since it was still early, there were gnats (nik nik) along the way so we have to move fast to stay away from this insect. 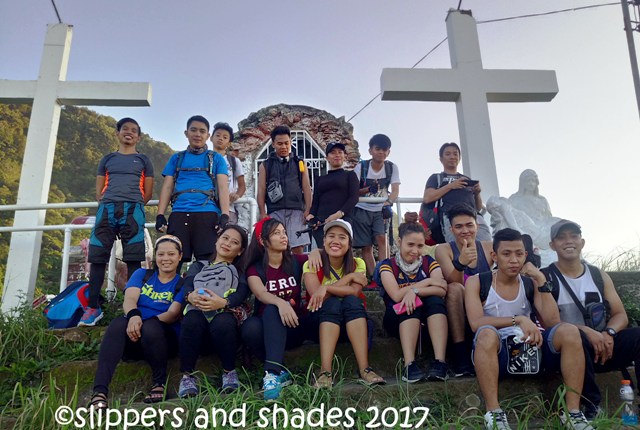 here is our group… notice how young my new trail buddies are hahaha!

The sun was slowly streaming to the forest when we reached the last station. From here, the trek started to challenge my feet and my strength as we trod on slippery soil and slightly muddy trail. I had to hold onto roots, vines, branches, and rocks for support on the steep incline. It was a tiring trek and I stopped several times to rest.

There were playful monkeys on trees. We stopped for a moment to take pictures. They seemed so nice but they did not go near us. Maybe they are protecting themselves from people to avoid harm.

The challenging part along the way was the rappelling. Seeing the big rocks and boulders, there’s no other way to go up but through the rope. This is my first time to do this and I had a hard time carrying myself up for I gained pounds. If I lose my grip certainly, I will fall on rocks. But thanks to Lhen and Sonny for giving me the courage to move on! 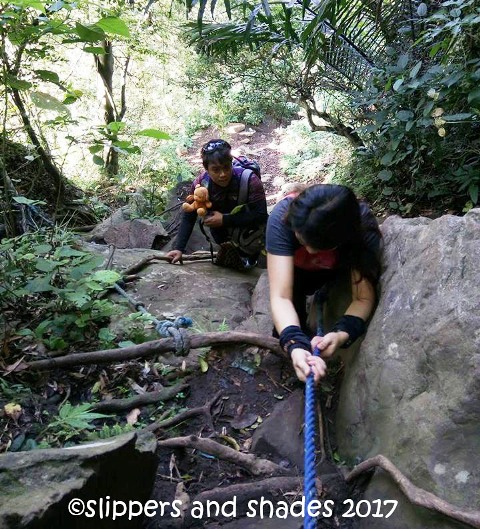 I had a hard time going up the rock formation through rappelling for I gained weight… wooooh!

The trek seemed endless as we went on a simultaneous steep ascent. One nice thing in Mt. Maculot is the presence of dense vegetation that gives ample shades to climbers from the sweltering heat of the sun. We reached the flat trail and had again walked on a steep incline in getting to the Grotto.

Upon reaching the Grotto we rested for a while and savored the wonderful view. After picture taking, we headed to the Summit. The ascent was steep but not as steep coming from the last station of the Cross. We exited the dense vegetation and later we were out in the open and was welcomed by a glaring morning sun. 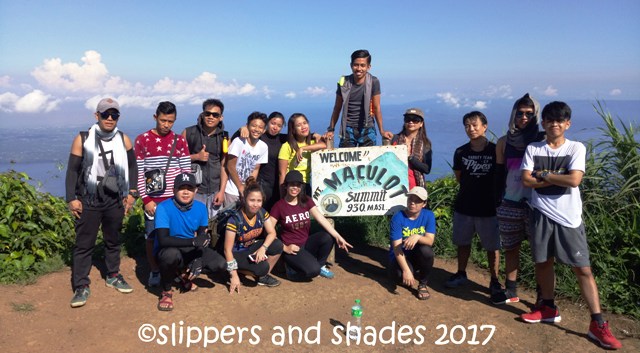 The view was awesome! I was mesmerized looking at the vastness of the Balayan Bay and the Taal Lake. I was first compelled to take pictures of what my eyes were feasting then later with Mt. Maculot’s iconic wooden board that says “Welcome Mt. Maculot Summit 930 MASL.” We all had fun taking pictures with a lot of happy jump shots as well!

We rested in a shaded part and ate our snack. Before we move on, we bought a glass of buko juice from a vendor near the peak. 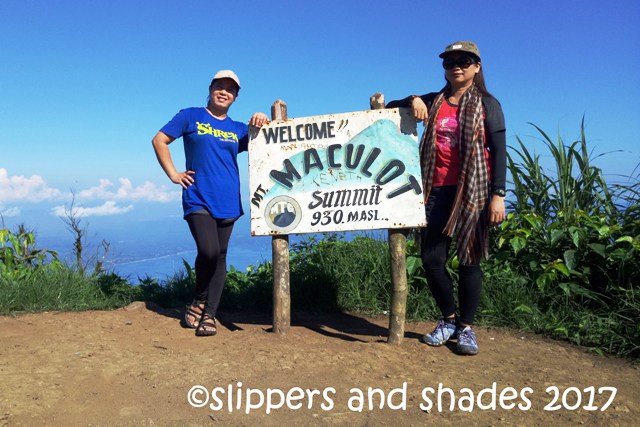 It was flickering hot the moment we set off to the most challenging part of this adventure.

In getting to the volcanic rock wall called the Rockies we traversed a trail with cogon grass as tall as our knees. After thirty minutes we reached the camp that served as a resting place. There was a small store that sells soft drinks, buko juice, crackers, and biscuits. But this is sold higher than the regular price. There was also a very basic comfort room for bio breaks (no toilet bowl and it stinks). 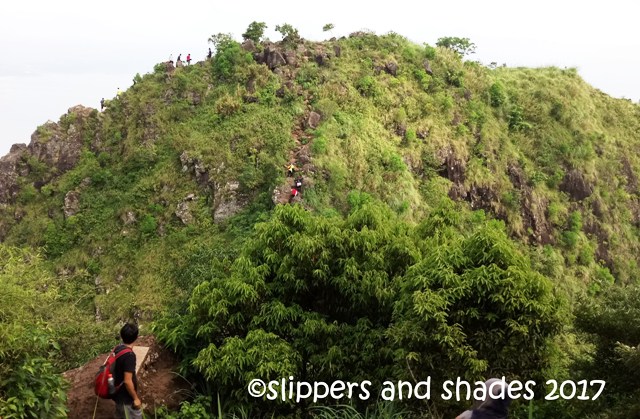 the treacherous image of Rockies as viewed from the camp site…

The peak of the Rockies can’t accommodate many people that’s why we waited for several minutes before we descend to the base through a slippery trail. The rope was so useful as I did not slide in getting to the base. 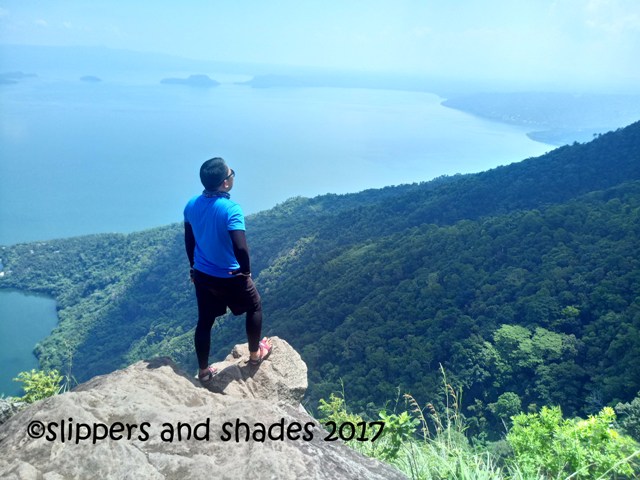 I was told that there were already four climbers died in the Rockies. That was scary, right? Before I set out, I prayed for the Lord’s guidance and protection. This is not an easy climb because both sides of the trail had deep ravines. Wrong step or hold, surely, I will die too! No kidding. 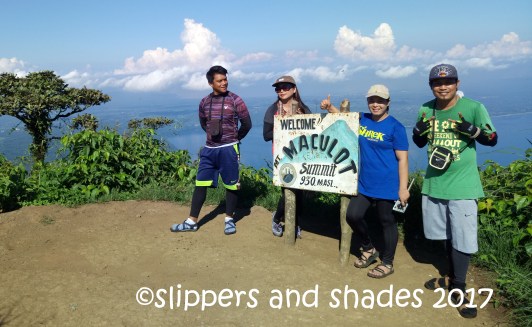 thank you so much to our two trail buddies who were so helpful and artistic when it comes to photography… good job guys!

Scrambling on big rocks and boulders wasn’t easy. But thanks to Sonny for assisting me. Upon reaching the peak, I stopped for a moment and admire the amazing view. It was a peaceful and wondrous sight seeing the vastness of the Taal Lake where the Volcano Island sits. The sky was so clear. It was marvelous standing there breathing a very fresh air.

But behind the amazing wonder is an extreme danger. The peak was small and it scared me looking down at the steepness of the ravines on all sides. Wooh! 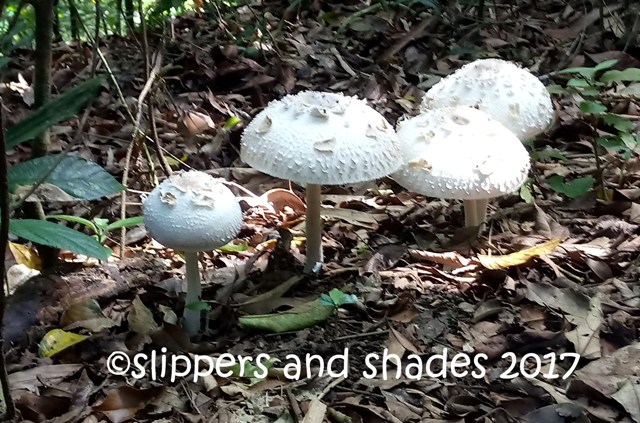 On the west side of the Rockies, all my trail buddies braved the “buwis-buhay” shot as they stood on the small rock protruding at the very edge. And there’s another one on the other side!

I wasn’t that brave anymore doing the same thing they did. At least I tried scrambling the Rockies which is another great achievement for a middle-aged mom like me.This is another worthy climb which is so far, the most challenging from the previous ones.

Scrambling again on the rocks and boulders in going down the base was a bit easy now. We went back to the camp and ate our lunch. After thirty minutes of rest, we head off to the jump-off point. The presence of loose soil made the trek slippery. There were several ropes along the way that helped ease the descent. We did the trek in one hour and fifteen minutes. 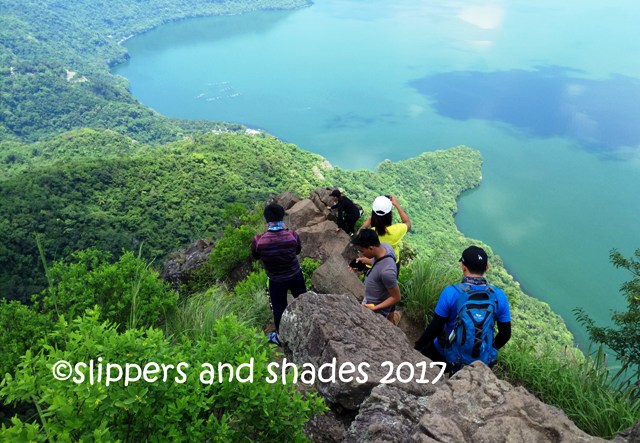 I was thankful to Jaymar for he was so supportive that’s why everything went smoothly. Thanks also to Lhen for her patience and for encouraging me that I can do everything even the hardest part of this trek. To our two trail guides and to my new trail buddies, thanks so much!  I hope there’ll be more soon with these guys!

Because of the simultaneous steep ascent, it is much easy to start the climb at Grotto and end it at the Rockies like what we did. But if you prefer a much challenging one, make the Grotto as your final destination.

We were in a group package and we paid P799 which includes van transportation, registration fee, two trail guides, sweet treats and name tag.

4:55 am – arrival at jump-off, start of adventure! trek to Grotto

9:30 am – arrival at camp site, rest, hydrate, waiting for other climbers to descend

10:30 am – arrival at the peak of Rockies, picture taking, enjoying the view