After summiting Mt. Pulag, my very first memorable major climb in 2016, here comes another exciting adventure as 2017 came in. Together with my office mates Janice, Rodett, Cyrhine, Lenie, and Pauline, we will embark on a thrilling and easy climb to Mt. Talamitam which is said to be the younger sister of Mt. Batulao as both have the same terrain. This is located in Nasugbu, Batangas with a height of 615 meters above sea level. 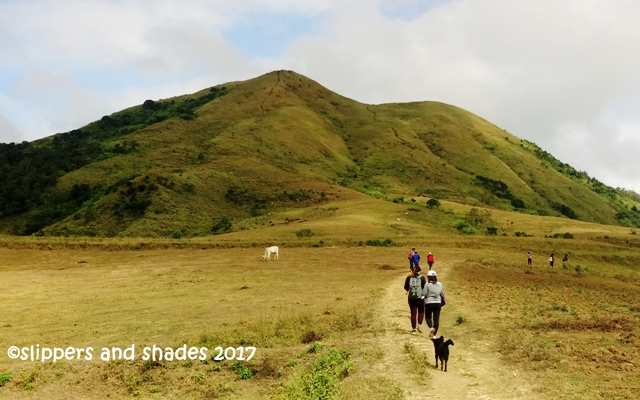 we were followed by a dog on our way to the grassland with Mt. Talamitam looming in the background

To fuel up our bodies for the climb, we ate a heavy breakfast in McDonald’s in Buendia, Pasay City near Jac Liner bus terminal. By 6:00 am we boarded DLTB bus bound to Nasugbu. We reached the jump-off point in Sitio Bayabasan around 8:00 am.

We paid P40 for the registration fee. A mandatory fee of P500 for the trail guide is to be paid after completing the trek.

By 8:30 am we set off to our climb. Just like Mt. Gulugod Baboy, we started ascending on a cemented road. But this one was not as steep as the latter. Few hundred meters away was a river. There’s a wooden bridge so there’s nothing to worry about soaking our feet in the water. A little later we traversed the woodland. 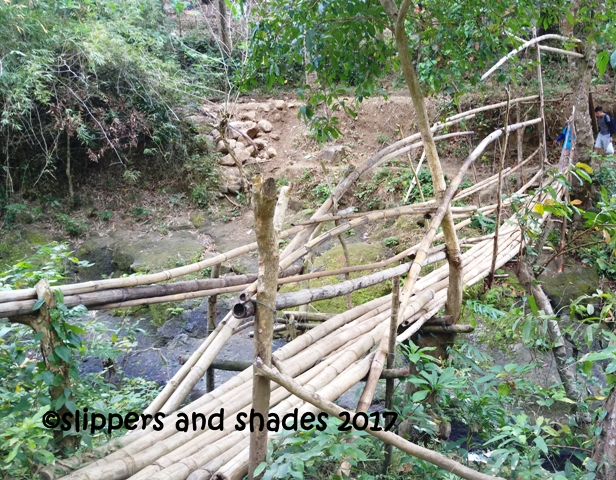 we passed the river in getting to the woodland

We started to perspire on the gradual slope. There was a little sari-sari store with wooden benches on the way so we stopped a while for momentary rest.

We continued walking until we reached the open sprawling grassland. From there, the summit of Mt. Talamitam proudly emerged right before eyes. It was a beautiful sight to behold. This was a grazing area and we saw several cows and there were dogs too. Since it was fairly flat, walking in the grassland was easy. 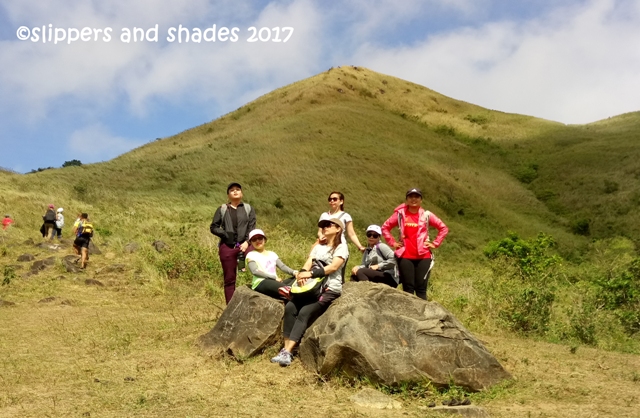 taking a pose while being soaked to direct sunlight

But there were no trees there to cover us from the sun. We were exposed to extreme heat.

Surprisingly, the weather suddenly changed. It was getting dark as we were halfway to the final assault. Looked like it will rain. We moved on and passed by sparse vegetation and few coconut trees. 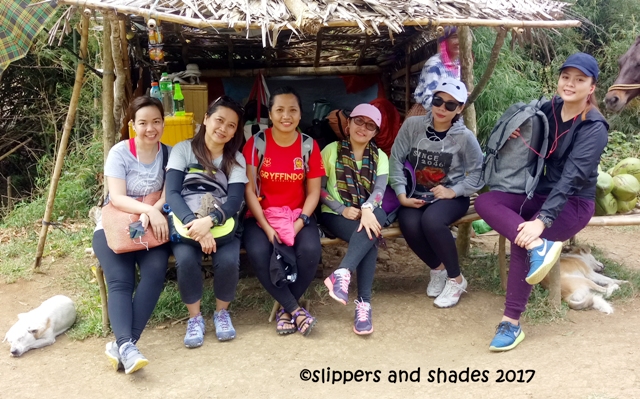 taking some rest after climbing the gradual slope

As we ascend to the 60-degree trail, I started to catch my breath. It was the steepest part and there were times I scrambled on talahib and rocks to make the climb a bit easier. The summit assault took us twenty-five minutes.

Overall, we did it for almost two hours.

When you reached the top you will no longer mind the sweat and everything that wore you out. My gaze had been focused steadily on the breathtaking views: the unobstructed grand landscape of Mt. Batulao, the surrounding towns of Nasugbu, hills of Maragondon, the Lubang Islands in Occidental Mindoro, and the forested Mt. Apayang on the right side.

I couldn’t contain my happiness as I was again fulfilled standing on top of a mountain. This one is another achievement for a casual trekker like me. 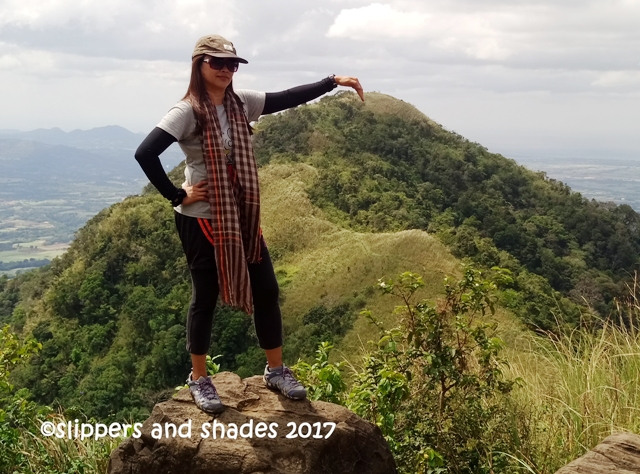 Mt. Apayang is on the right side when facing Mt. Batulao

I love watching the swaying grass, embracing the wind, and mingling with fellow trekkers. And what made this one memorable, is our photo ops atop the big rocks which I did for the first time. I smiled in delight. I was preparing myself for many challenging climbs maybe one to two months from now. 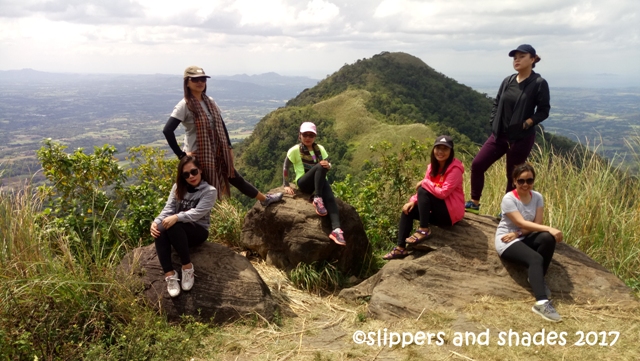 Later the sun was now hovering in the sky thus making it so hot in the summit. There was a vendor selling cold drinks like mountain dew and Gatorade for P45.00, enough to quench one’s thirst. We stayed awhile under the tall cogon grasses which shaded us from the sun and ate our snack.

We took a different trail in our descent since we will be visiting Labong River in Layon Bilog River View located near Barangay Aga. The trek back was easier and seemed shorter. We reached the river in less than an hour. 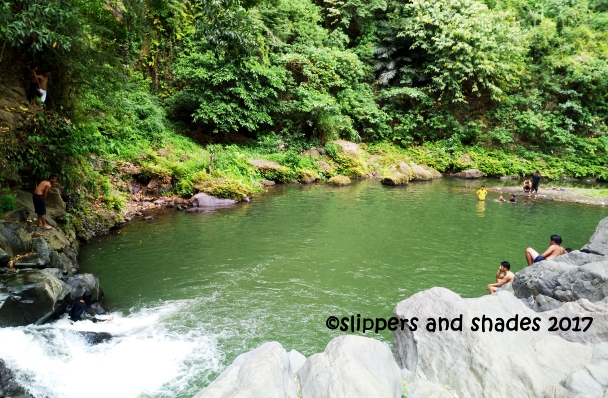 it’s good to end the day soaking in the river

Layon Bilog River View is a campsite and picnic area. There’s an entrance fee of P20.00 if you want to swim in the river and if you want to stay overnight you have to pay for P50.00.

Some trekkers ended up the day frolicking in the water. It was so tempting to swim but we decided against it. After walking on big rocks we sat awhile savoring the fresh scent coming from the lush vegetation and enjoyed watching the flowing river. 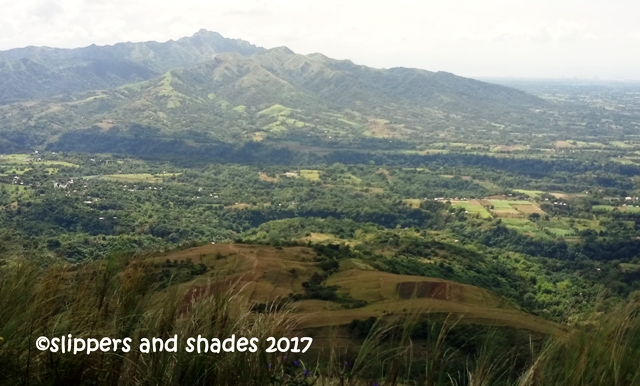 the grand landscape of Mt. Batulao

A moment later, we ascend to the main campsite, passed by the picnic tables, and was accompanied by Ariel, our guide to a karinderia to settle for lunch.

And that ended our climb today. It was an easy trek and I highly recommend this mountain to beginners. A day hike can easily be organized.

By the way, Talamitam was named after talamitam trees that used to grow on its slopes. But sad to say, there are no talamitam trees anymore. Mt. Talamitam is a bald mountain that will surely expose you to extreme heat on dry season.